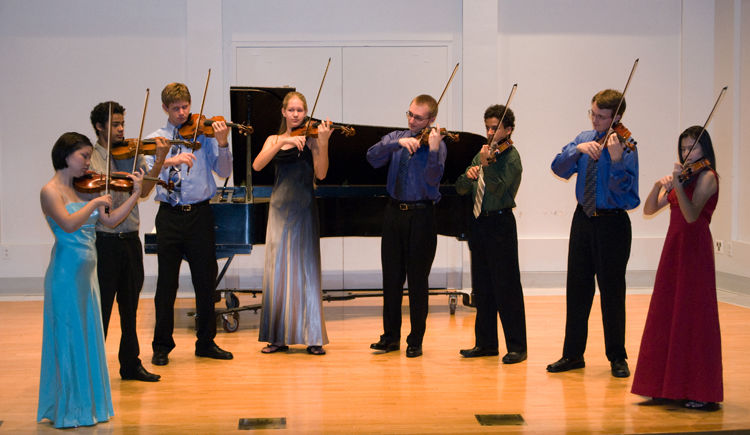 It is a unique group of violinists between 13 and 19 years old who play as soloists and as an ensemble. Their repertoire includes Bach, Brahms, Bartok, Kreisler, Prokofiev, Vivaldi, Shostakovich, Sibelius, Tchaikovsky, Telemann, Dinicu-Heifetz, and many innovative contemporary compositions composed for the ensemble.
The performers are talented young students studying at the Jacobs University Jacobs School of Music String Academy. Their intense musical curriculum includes weekly private lessons, chamber music, theory, master classes, and rehearsals with the ensemble.
This group of young people has played all over the world. Many of them have won national and international competitions.
Mimi Zweig, Director - Brenda Brenner, Co-Director - Charles Webb, Piano
Indiana University Virtuosi: Brian Allen, Alex Ayers, Amy Lidell, Gregorio Lopes, Ren Martin-Doike, Misha Sanderson, John Smith and Stephanie Zyzak
Promoted and organised by the Foundation, they performed at the Swiss Society Hall in June 2010. 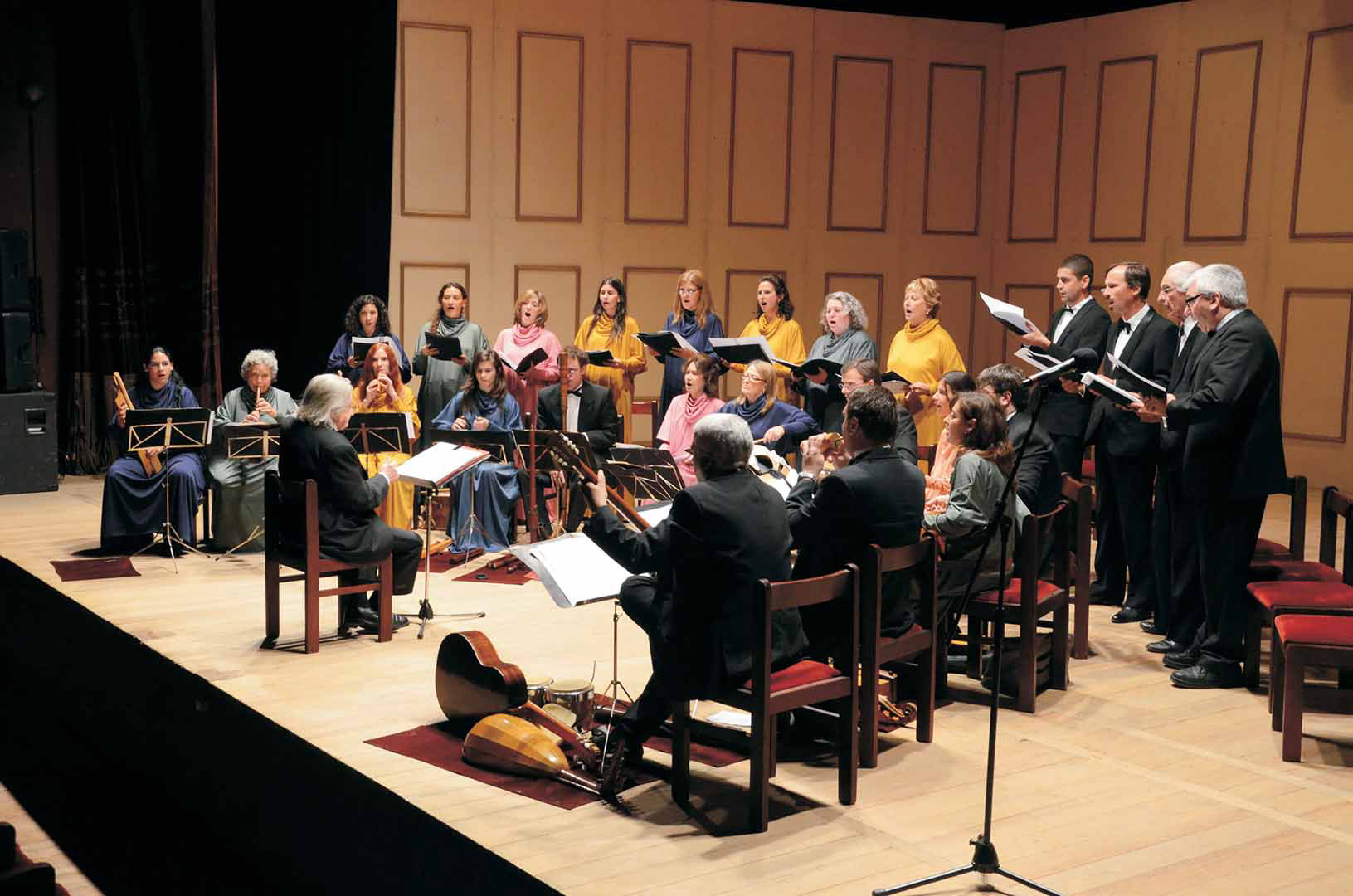 Founded in 1962 by Cristián Hernández Larguía, the Pro Musica Ensemble is dedicated to the performance of music from the Middle Ages, the Renaissance and the Baroque.
Since it was founded only five years ago, in 1967, it was awarded First Prize at the International Polyphonic Competition in Arezzo (Italy), and has been distinguished on numerous occasions, both nationally and internationally. His tours in different European and American countries (England, Germany, Spain, Italy, USA, Mexico, Panama, Puerto Rico, Venezuela, Colombia, Peru, Chile, Uruguay and Brazil), as well as his performances in Argentina, have earned them the constant support of the public and specialised critics.
With 16 recordings released, the number of its members allows them to tackle different concert programs of different styles and periods.
Promoted and organised by the Foundation, they performed at the Sociedad de Canto hall, in November 2015. 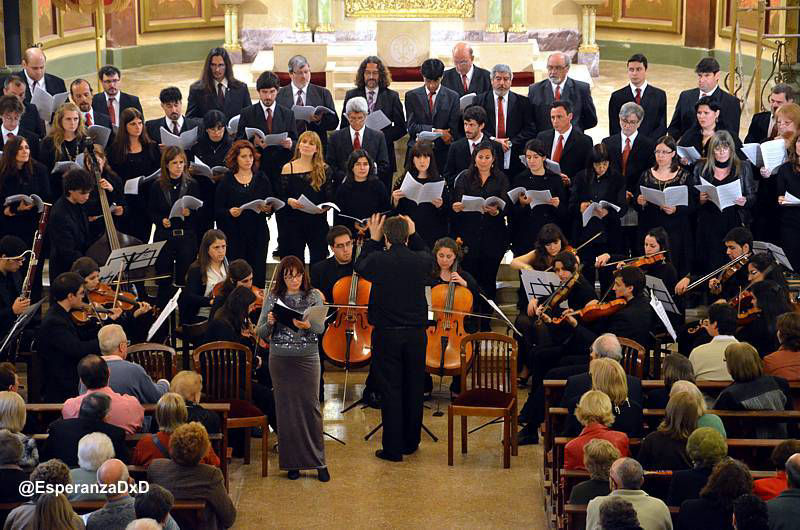 The Camerata Eleuthería was formed on the initiative of a group of young musicians in order to study and learn the interpretative and stylistic techniques of 17th and 18th century music. This chamber orchestra, which is conducted by Manuel Marina and coordinated by Guillermo Gonzalez, already has a vast repertoire performed on different stages in our city. Among others, it performed concerts with the Choir of the Mario Monti Choral School of Paraná, its pair from the National University of Entre Ríos and the Santa Fe Provincial Polyphonic Choir under the direction of Sergio Siminovich. They also performed concerts in Humboldt, in the Municipal Theatre of the city of Santa Fe, in ATE Casa España, the Convent of San Francisco, the Church of San Miguel of Paraná, the Theatre of Concepción del Uruguay and on February 3 of Paraná, among others. 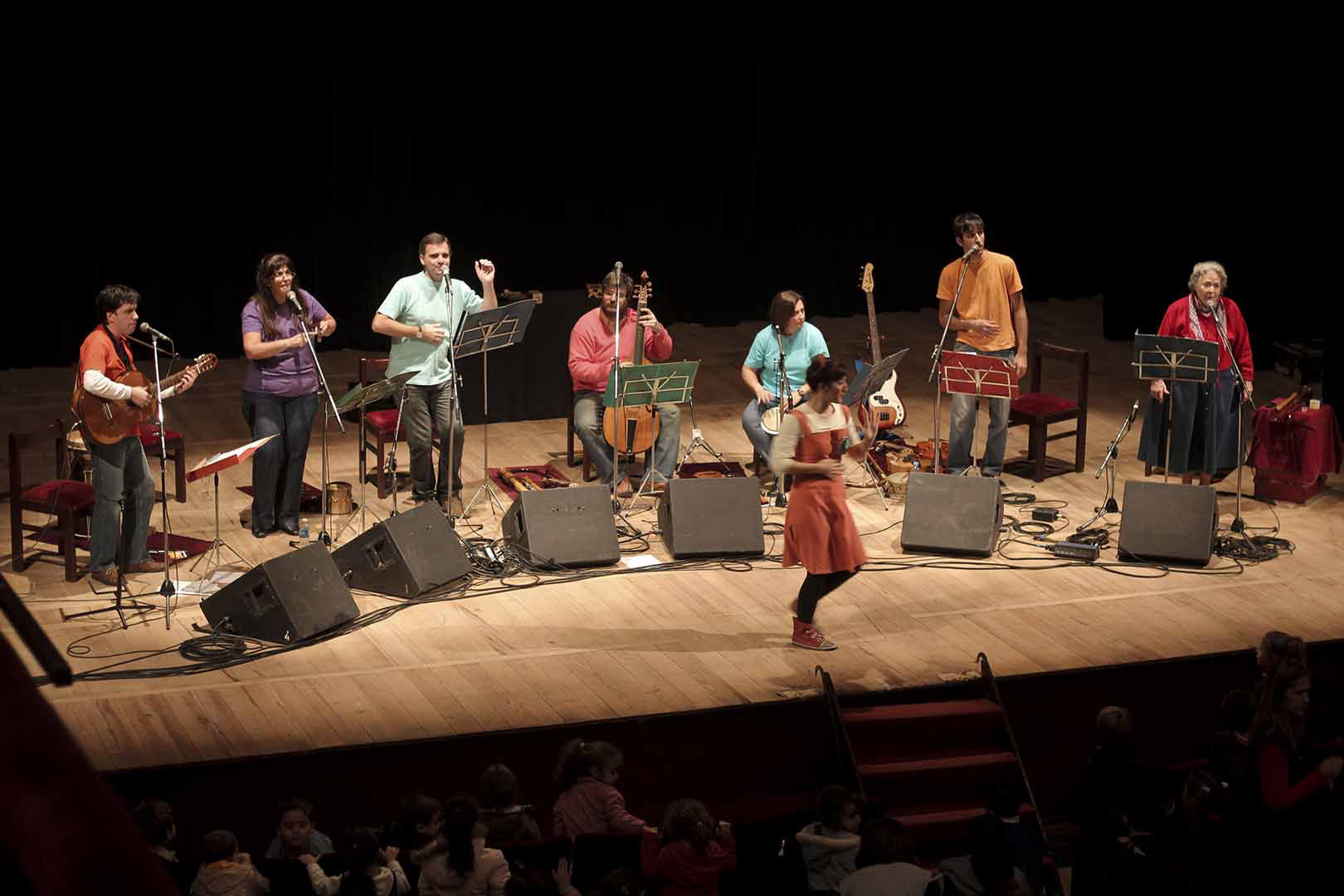 This group began its activities in 1969 with the purpose of contributing to the musical education from childhood, through recordings aimed at children.

The activities carried out during each concert can be classified as follows:
1) Musical storytelling and didactic-musical games: "riddles" and "echoes"; "sound climates" and sounding of gestures with onomatopoeias for training and auditory recognition of sound parameters (height, intensity and timbre) and of movement dynamics (slow, moderate and fast). Games with use of the body for: a) dramatization of the texts of the songs; b) rhythmic practice; c) exercise and recognition of the phrasing and musical forms; d) evaluation of the character of the music.
2) Singing: Choruses, simple songs in unison, ostinatos, canons and quodlibets.
3) Music listening: Active appreciation of different types of simple musical works.
Repertoire
Traditional and non-traditional national and universal songs, folk and popular
Vocal and instrumental works from the Middle Ages and the Renaissance
Instruments used for the interpretation, learning of names and recognition of timbres
Strings: Tiple, Violas da Gamba, Bouzouki, Guitar, Electric Bass
Winds: Recorders, Crosswords, Cromorns, Bombarda
Percussion: Xylophones, Metallophones, Medieval drum, Toff, Tambourines, Chinese box, Bongo, Maracas, Cabasha, Guiro, Bells, Informal instruments 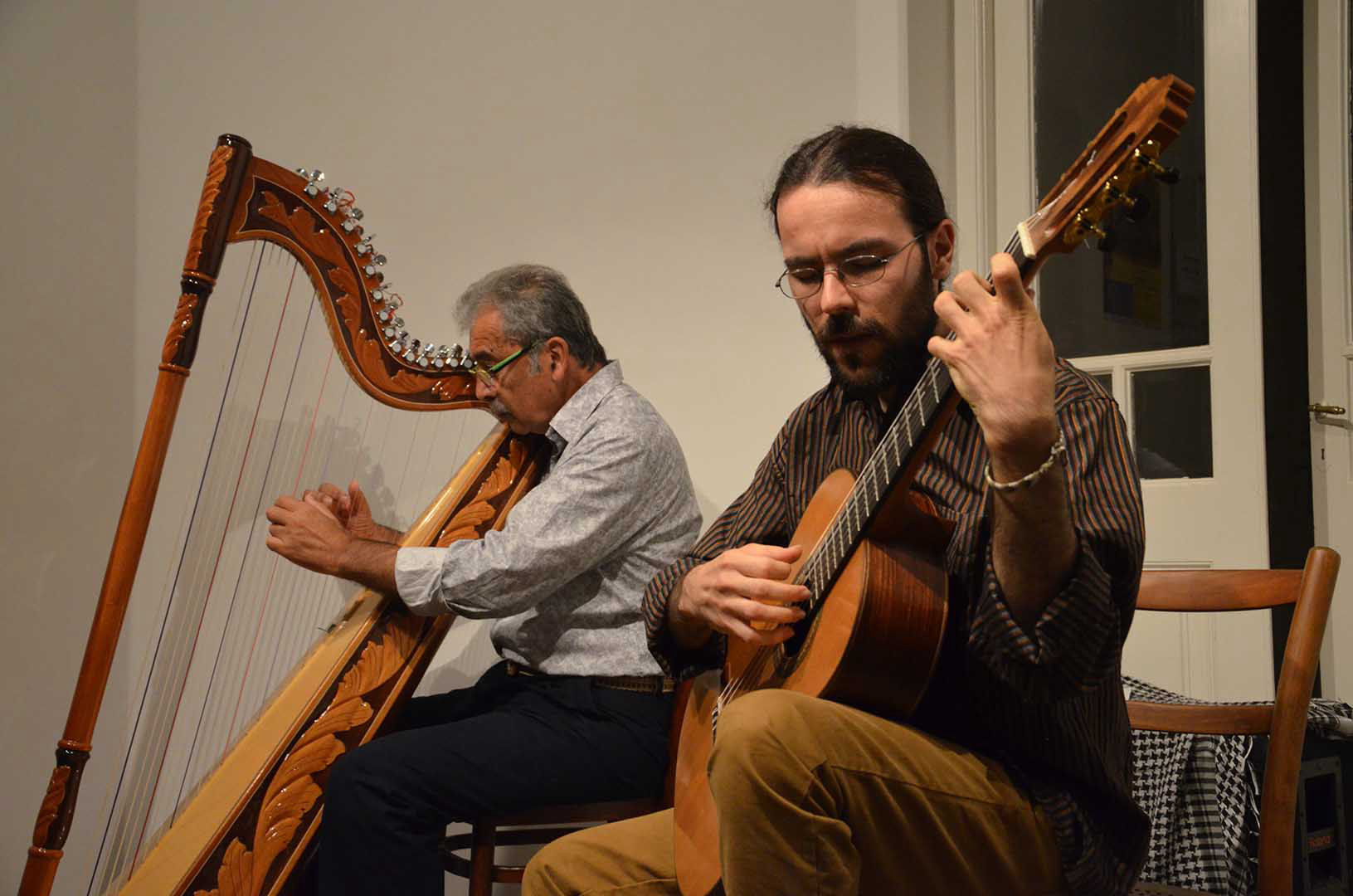 On 2014 & 2015, the Ramseyer Dayer Foundation offered concerts of great artistic level with the combination achieved with two artists of great interpretative level with Harp and Guitar.
An evening to enjoy. The concert of great musical quality was provided by the Esperanza musicians Alfredo Jorge on harp and Gaston Menguez on guitar, who once again delighted the large audience present with a repertoire of exquisite Paraguayan and Argentinean music.
The combination of strings also had dances with Nora and Mariano, and also the dancer María Cristina González was invited,  who added their light to the musical beauty.
The repertoire made us travel with chamames, polkas and zambas through Paraguay and Argentina. They performed works by Luis Bordon, Polo Giménez and some of their own compositions.
The musicians felt very much at home with the warmth of the crowded audience, a warmth that, they expressed, they wanted to transmit with their music.
"We decided not to amplify our instruments to create a more intimate atmosphere," Alfredo said.
Grateful, they said goodbye with the classic "Pájaro campana", which was requested by the public once their repertoire was finished.

Fanfarria Ambulante returned to Esperanza, to celebrate the 10 years of the Ramseyer Dayer Foundation on October 27, 2018.
The Fanfarria Ambulante is a scenic-musical quartet that fuses music, body in action and humor. It was born at the 1st FestiClown in Santa Fe Spring (2013), as a music band and it accompanies it every year since then.
In 2015, it settles as a scenic-musical group, and develops its first creation, "Música para Jugar", a street show of music and humor.
Since then, it has performed in more than 180 presentations in festivals (Festiclown Santa Fe, FTR Rafaela, Fest. de Teatro de Humboldt, Corriendo la Coneja - Paraná) and in localities of Argentina.
In 2018 they presented their first self-produced album "Música para Jugar".
At the same time, they developed their proposal for stages "Boom", which they were able to present on several occasions (together with "Emparche", a percussion ensemble) and continue to bet on street music (Conference "The street as a stage" and Workshop "Jugando en Fanfarria" in development).
"Música para Jugar" is the first scenic-musical creation of the "Fanfarria Ambulante".
By breaking into a square, 4 companions appear in the distance, as if they were taken from an ancient world in which words did not count. Armed with pipes, patches and bellows, the winds begin to blow and the feet are infected with happiness. The music of the "far east" of the Balkans, mixes with that of the west and its swing to intertwine with the cumbia and Latin American heat.
The 4 characters play music, among themselves and with their audience. They are polite and out of place, seductive and repulsive, they are sepia and full of colour, they make us laugh and miss, they invite us to keep having children's eyes. As that grandmother told us: "the eyes never grow old".

Currently open and with deadline 30 September 2020.